”The Passing Away of Bapu” By Nayantara Sehgal: 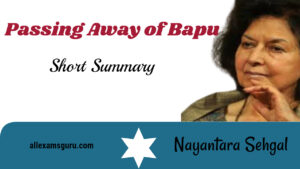 It was the evening of 30th January, 1948. The narrator was enjoying tea at home. Suddenly she was apprised of the most shocking news of Bapu’s being shot by an emergency telephone. She was asked to come to the Birla House where Gandhiji’s body was laid. At the time of heading towards a prayer meeting he had been shot. Bapu’s death filled the hearts of his relatives and followers with sadness. All the people present in the house could not accept the hard reality. There prevailed an unusual tranquility.

The followers who gathered outside the house desired to enter the house by force to see Bapu before his funeral. Their guardian’s spirit left the earth. So they appeared as lost children. People of India were informed of Mahatma’s death by radio broadcast. Gandhiji’s funeral rites were accomplished on the second day of his death. To witness Bapu’s funeral procession his followers queued on the road for hours in advance. Padmasi, Mrs Naidu’s daughter declared on behalf of the grieving people that all of them wished to walk with the funeral procession.

Bapu’s dead body was kept on an open truck. The truck was covered with flowers. Seeing Bapu’s lifeless body people cried and tried hard to touch his feet to receive benedictions. This was not mere funeral procession, rather more than that. This great son of India travelled a large part of India on foot, holding only a walking stick in his hand. His fighting spirit provided Indians with a great inspiration. Walking makes slow advancement. As walking requires only energy from body and nothing else, Gandhiji converted walking into a pleasing work.

Gandhiji’s ashes were immersed in the Ganges at Allahabad. A special train was arranged for this purpose. The compartment was embellished with flowers. The people sang bhajanas. Gandhiji’s presence was perceived in the midst of flowers and songs. The narrator was morose. Bapu’s death made her feel helpless and hopeless, though she never actively participated in any movement led by Gandhiji. Bapu breathed his last but his inspiring utterances and activities would be nurtured at the subterranean depth of Indian hearts.

Full Summary of The Story ”Father’s Help” by R.K. Narayan

Tags:Class 10th English SolveShort Summary of The Passing Away of Bapu