Full Summary of The Story ”Father’s Help” by R.K. Narayan 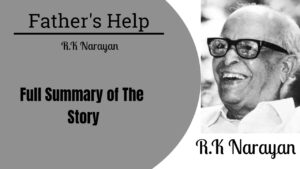 On a Monday morning, Swaminathan was unwilling to go to school. He pretended that he had a headache. While his affectionate-mother was lenient, his father was very strict. So Swami took another tactics and pleaded, he could not go to school so late and falsely accused his teacher Samuel of being a very angry man who would scold him severely if he was late in the class.

His father seemed somewhat convinced. Swami had thought his father would see his point for avoiding school that day.But unexpectedly his father wrote a letter apparently about Samuel and asked Swami to go to school and give the letter to the headmaster before entering his class. Swami began to feel really bad. He now began to think over the teacher again. His conscience pricked him that Samuel was not a bad man at all.

He felt guilty as it was because of him that his father had written a long letter about Samuel. He felt much grieved for his teacher.As Swami entered the school he planned to deliver the letter to the headmaster after the school hours. For, by then, he might have a chance to judge Samuel and see if the letter was justified. But Samuel was very nice to him.

He did not scold Swami for coming late, nor was he angry with Swami even when he could not produce his homework. Moreover, he appreciated the attitude of Swami’s father against absenting from school. All this made Swami forget his reservations about the teacher and love him more than ever. Still, to be true to his father, Swami went to the headmaster’s room after school hours.

He found to his relief, that the headmaster had gone on leave for a week. On his return, however, his father took the undelivered letter from his hand and tore it up, commenting that he knew Swami would not deliver the letter.

2 thoughts on “Full Summary of The Story ”Father’s Help” by R.K. Narayan”