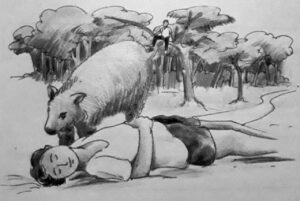 Two friends are walking beside the forest. Suddenly a bear appeared at some distance facing them. Both the friends were terribly frightened. Then one of them climbed up a tree nearby. The other friend did not know how to climb up a tree. So, he lay flat on the ground pretending to be dead. Then the bear came up to him, smelt his body and left the place thinking him to be dead. Now, the selfish friend came down and said to him “What did the bear whisper into your ears, my dear friend?” The friend replied, “Don’t trust a friend who leave you in
danger.”

Moral: A friend in need is a friend indeed, or, prosperity brings friends adversity tries them.