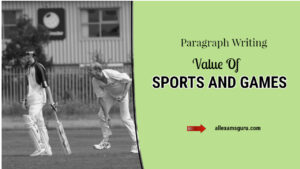 VALUE OF SPORTS AND GAMES

“All work and no play makes Jack a dull boy” this very adage revealsthe value of sports and games in our life. n ancient Greece games formed
essential paut of education.. In the developed countries games andansports are integral featUres of the academic curriculum in Schools and
Colleges. In India sports and games are not given that much value. Wehave very few athletes and sportsmen of international renovwn expect inthe field of cricket and hockey. The Jam Sahib of Nawanagar or Ranjit
Singh, Sunil Gavaskar, Kapil Devor Sachin Tendulkar created’ history in
the world of cricket. We have Dhyanchand and Premchand in Hockey
who have won golden throne in the mind of sport-loving people.
Nevertheless, the country of 85 crores of people have yet to producemany more sportsmen in various fields of sports: India usually curs a very
Sorry figure in the international sports meet, In Asian games, in the
Barcelona Olympics or in the World Cup Football in France, less said

about India, the better. We can at best boast of a P.T Usha, Siny
Abraham, Milkha Singh or a Leander Paes. The list has to be cut short.
We have not shown brilliance in other ourdoor and indoor games.
Megastars are not the need of the hour. Sports nlust have a wider
base. At present there is no_dearth of trophies and rewards. There are the
Arjun Awards, Nehru Gold Cup, Federation Cup, RanjitTrophy and so
on. But there are very few centres ofT raining. Only in Patiala, Calcutta
and at a few other places we have such centres. There is little effort for
encouraging and popularising the indigenous games like kho kho,
hadodoo, kabadi and others. Discipline, collective encounter, courageous
tackle and many such qualities are developed. A sound mind resides in
a sound body. Sports and games assure physical fitness: The proverbial
saying goes: “The battle of Waterloo was won in the playfield of Eton.